Filed Under: Android Apk, Android Game, FIFA 14 NewTechie.com Admin
FIFA 14 Android game update with the Adidas Brazuca ball and fixed some errors. This is one of the best soccer games out there. Build your ultimate team and compete in tournaments to earn coins, then spend them on new players and items to improve your team. The game itself is cool, with ultimate graphics and customized for tablets, this game satiates every hungry football fan. Feel the excitement of every pass, shot, and tackle with new touch controls.

Welcome to the most authentic football game for Android smartphones and tablet. The game FIFA 14 has great graphics, great controls and the fact is for free makes it just perfect. You can play it again and again. Background music and game play is totally awesome and very addictive. It's smooth with commentary in more languages graphic are much better than FIFA 12.

The 2014 FIFA World Cup Brazil has arrived! Take to the pitch with officially licensed national teams and kits. The same version of PC, the game is made for the real fan of football fans and players. Compete in all-new matches of the week and show your pride on the world's stage. 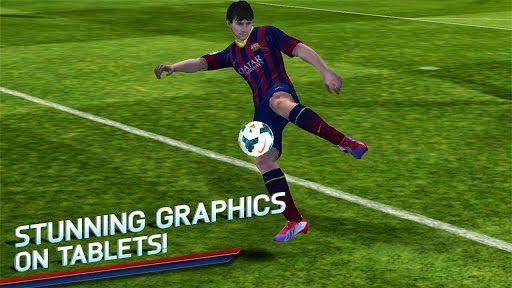 As a single player game it's the best football experience one can get on a mobile game. This game is unique comparing other football game better graphics better gameplay go for it. You get to choose what game to play as in Manchester united vs arsenal or real madrid vs barcelona and has good control. Recommend this game to anyone that likes football games, it's rocks to the core must download it.

- Earn and trade, or buy and sell FIFA players to create your own fantasy team.

- Killer soundtrack with the hottest artists, from Empire of the Sun to Vampire Weekend.