3. MapReduce- This is a programming paradigm that allows for massive job execution scalability against thousands of servers or clusters of servers.

4. Hadoop- Hadoop is by far the most popular implementation of MapReduce, being an entirely open source platform for handling Big Data. 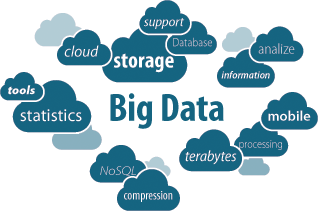 6. PIG- PIG is another bridge that tries to bring Hadoop closer to the realities of developers and business users, similar to Hive.

7. WibiData- WibiData is a combination of web analytics with Hadoop. It allows web sites to better explore and work with their user data, enabling real-time responses to user behavior, such as serving personalized content, recommendations and decisions.

8. PLATFORA- PLATFORA is a platform that turns user's queries into Hadoop jobs automatically, thus creating an abstraction layer that anyone can exploit to simplify and organize datasets stored in Hadoop.

9. Storage Technologies- As the data volumes grow, so does the need for efficient and effective storage techniques. The main evolutions in this space are related to data compression and storage virtualization.