Filed Under: Android Apk, Android Game, World at arms NewTechie.com Admin
World at Arms android game updated with new daily faction event and invasion with higher rewards. This update was improved the game in a better way. The new update is very good, especially the invasion improvements. Comes with advance in faction leagues for solo bonuses, new daily and hourly solo events made World at Arms is better than the earlier version. In this modern war strategy game, you will battle across the globe, in the sea's depths, on the ground, and in the air, following a deep solo campaign and fighting in an exciting multiplayer mode. You can really wage war for your nation and create a country that dominate all who oppose.

Best military strategy game from Gameloft with brilliant graphics, stunning animations, and realistic units and buildings. Collect resources, build, upgrade, and fuse units, construct facilities, and complete numerous achievements to earn free bonuses. with the new improvements made this game went from fun to strategically brain testing and addictive. Its a great spear time killer. If you want to play a good battle game download this one, you wont be disappointed top marks. A truly great game, also it is not a player who pays to play like Clash of Clans e.t.c. You don't have to spend money like a lot of players do to enjoy, just battle away. 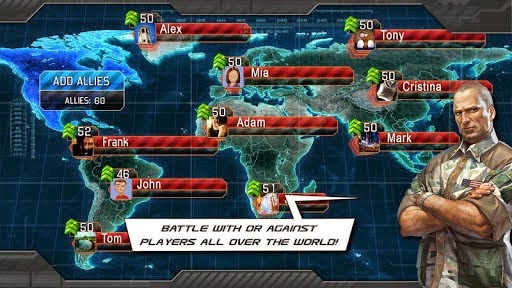 If you are a fans of strategy games or modern warfare games, World at Arms is suitable for you. A very enjoyable strategy game with both pvp and pve elements. Base building, campaigns, quests and multiply. It's a great game to play with a lot of challenges and wars. You will like how you get to see your units in action unlike other games like modern warfare extremely fun! Defiantly suggest every who like strategy games to get this.