Filed Under: Passowrd NewTechie.com Admin
How to Create a (More) Secure Password, With so many people out there who are keen on getting into your personal information for reasons ranging from malicious mischief to outright theft, it is important to have a secure password for all your various accounts.

Sometimes, the most effective way of learning how to do something is to be made aware of what is NOT a good idea. In other words, learn from other people's mistakes. Here's some of the worst mistakes you can make (and what you can do about them!). 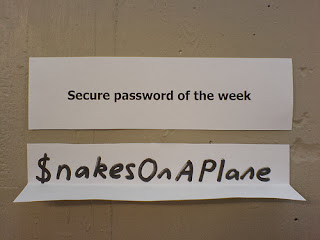 
Password Is: Password!
You would be amazed at how many people simply don't ever change their password from this default. Granted, these days, a lot of assigned temporary passwords are a veritable goulash of alphanumeric characters (and consequently a big mess to try to memorize), but in those rare instances where it's simply "password", anything, even a weak made up password, is better than this. Incidentally, "admin" is right up there with temporary passwords that need to be removed post haste.

The Sesame Street Password
Just like the educational kids' show taught numbers by endlessly singing about "1, 2, 3", so some people take the lazy way out and end up using a numeric sequence as a password. Again, bad idea. If you want to go all numbers, try a six digit number that's a date, but NOT your birthday or anniversary. Maybe the first day of your first job, or the date you lost your virginity (or the anticipated target date if that milestone hasn't been achieved yet!). Oh, and you're not fooling anyone if you decide to do a backwards count as a password. Really. Just avoid the whole sequential number thing.

Hello, My Name Is Password
Really? You're going to use your name, or some iteration of your name? Avoid your name and the names of anyone in your family. Anyone who can access public records and see who's in your family will have a nice handful of clues to work with. Avoid the names of you and your household and yes, that includes your pets.

The Cat Walked Across The Keyboard Password
No, QWERTY is not a good nor a clever password. It's been done, and hacked. Sure, it's convenient and easy to remember. It's also laughingly easy to guess.

Know Me, Know My Password
This is especially common on sites where you have an account where people see your posts and profile, and if you think that people can't do damage to you on a social media site then you have another thing coming. If you're a Red Sox fan for instance, having a password like "Red Sox", "Fenway", "Big Papi", or "Green Monster" is an invitation to a hacked account. Your password should never be something that you're predominantly known for or are passionate about.

Okay, So What SHOULD I Do?
Good question. When designing a secure password, keep these things in mind: a mix of numbers and letters is good, and a longer password is better than a short one. If you have any nonsense or made-up words, throw one in with a string of three or four easily remembered numbers. Maybe you're sitting at home watching a rerun of the Muppet Show, and you're pondering your five foot ten stature. You might decide that "Wocka510" is a good idea.

And if your passwords are a bit tricky and obscure, just remember to write them down and then stash them someplace safe that's not your desk.

Byline: John Terra has been a freelance writer since 1985. He really enjoys creating whacked-out passwords in an effort to protect his online reputation.