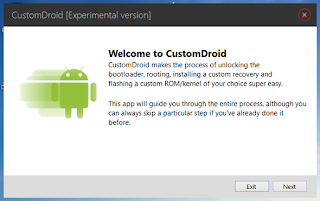 Created by an XDA senior member, CustomDroid can unlock the bootloader on some devices, flash a custom recovery, and finally flash a custom ROM. It can't currently root the device or flash the required custom kernel, but we hear that such capabilities are currently being worked on.

While not all devices are supported, most of the main ones are: Nexus 4, Nexus 7, Nexus 10, Galaxy Nexus, Nexus S, Nexus One and HTC One are all on the list, though there are obviously some notable exceptions. It's early days though, so we're willing to give CustomDroid the benefit of the doubt for now. Hopefully in time we will see new devices added to that list, making flashing custom ROMs easier for even more people.