Filed Under: Chromecast, Moto X NewTechie.com Admin
Motorola has sweetened the deal a bit more for buyers of its Moto X.

After reducing the Moto X's off-contract price last week, the Google-owned handset maker announced Thursday that it would throw in a free Chromecast wireless video-streaming dongle with purchases of the off-contract handset. The deal, which runs through January 14, can be claimed on the $399 16GB and $449 32GB models.

The deal is an apparent attempt to get both devices in more consumers' hands. After a muffed Cyber Monday promotion that offered the Moto X for $349 resulted in a do-over, the company has been moving aggressively to drum up interest in the handset. On New Year's Day, the company dropped the Moto X price from $579 without a contract to $399 on most major carriers (though Republic Wireless has been offering the Moto X for $299). 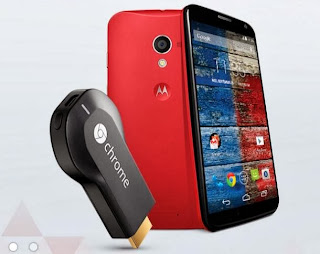