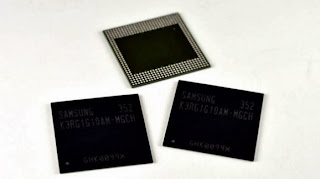 Samsung has announced the world's first 8 Gigabit mobile RAM, which it says will increase performance in smartphones and tablets while reducing battery consumption.

Samsung said it will use the next-gen memory to focus on large-screened and high-resolution smartphones, tablets and ultra-slim notebooks, including devices with 4K displays.

And the Korean Media reports that the Galaxy S5 will be the first phone to use it.