[Free iTunes Video Download] Doctor Who - Doctor Who Confidential: An Inside Look At the TARDIS 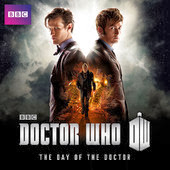 Featuring the 50th anniversary episode, this special collection is the definitive celebration of five decades of adventures through space and time with the Doctor and his companions. First broadcast in 1963, Doctor Who is the world's longest-running sci-fi show and is watched by an estimated 80 million viewers in 206 countries across the globe. Discover the rich history of the Time Lord in Doctor Who Revisited, enjoy the best of Murray Gold's musical score in Doctor Who at the Proms and see how the show began in the drama An Adventure in Space and Time, written by Mark Gatiss. Finally, Matt Smith and David Tennant co-star in the spectacular feature-length anniversary episode - The Day of the Doctor.

Leading up to the 50th Anniversary, revisit the Series 6 episode "The Doctor's Wife," written by Neil Gaiman, and take a look behind-the-scenes, including brief views of TARDIS control rooms past. Gaiman himself reads part of the script and gives special insight into the underlying relationship between the TARDIS and the Doctor.

Download For Free Here: Doctor Who - Doctor Who Confidential: An Inside Look At the TARDIS