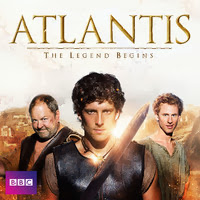 "Ancient Greek myths and legends are brought to life for a new generation in this thrilling fantasy drama. Ripped from his present day search for his father, Jason wakes up on the shores of a strange land. A wondrous place; a world of bull leaping, of snake haired Goddesses and vast palaces - this is the lost city of Atlantis. As Jason searches for the truth about his father he embarks on an epic adventure which sees him brush shoulders with Medusa, come face to face with the Minotaur and even do battle with the dead." -- iTunes Store

Enter a mysterious world with legendary heroes and mythical creatures in Atlantis.

Note: Each free download will be free for approximately a week (until the iTunes Music Store updates their singles again), so if you wait too long after that then you will have to pay for them.