Filed Under: Apple, iPhone 5C, iPhone 5S, Video NewTechie.com Admin
While most of the world continues to wait for the iPhone 5S, some have managed to snag some hands-on time.

Among the tidbits for folks who haven't seen the device yet is the easiest way to tell an iPhone 5S from an iPhone 5 (aside from the champagne gold color). The newer device has a ring around the Home button, which now serves as a fingerprint reader for security purposes. In addition, there is no longer a "square" in the middle of the Home button. 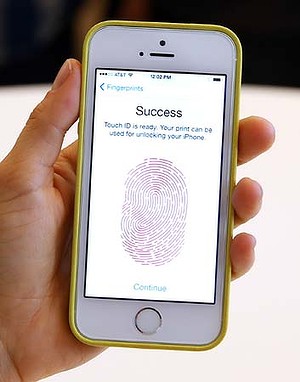 While many will pooh-pooh the fingerprint reader, if it works as well in real-life use as in Apple's (ideal condition) demos, it will be a boon to Apple users, although one that only saves -- what? -- perhaps a couple of seconds off of each login? Consider how many times you might need to login daily, and it could prove useful -- and one-handed, too.

Unlike Android's facial recognition, which Google warns is "low" security, fingerprint recognition isn't -- unless, of course, someone pulls a "Demolition Man" style-login.

Apple did add a second LED for the iPhone 5S' flash, so that its True-tone flash would work properly.

The other big change for the iPhone 5S -- which is clearly, as an "S" model, a device that builds on and refines the iPhone 5, is the A7 processor. Apple claims a lot of things, speed-wise, about the processor, but no matter how well it benchmarks, it will surely be surpassed in the year between now and the iPhone 6. Still, everything running on the device appeared to work as "smooth as butter."

Watch the video, available below: