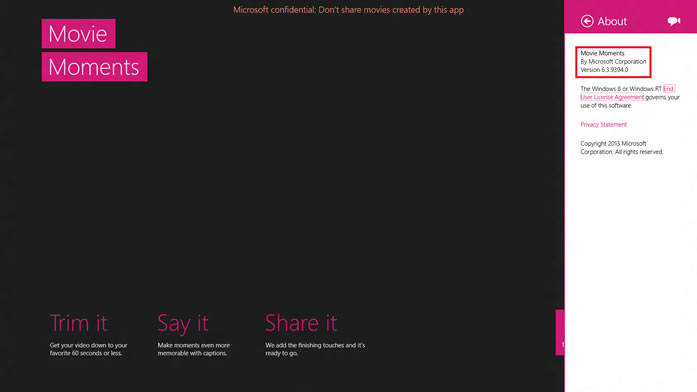 It appears that we will be able to update Windows Store apps in the upcoming release of Windows 8.1. Movie Moments, an app we know exists in build 9385, was recently and silently updated via Windows Update.

The Movie Moments app got an unexpected face-lift this weekend and now users have noticed that the app was updated to version 6.3.9394 after using Windows Update in Windows 8.1 Pro Preview build 9385. It is apparent that there is now a different "Movie Moments" title in the top left corner of the App's information instead of nothing (which was the case for the versions prior to this one).

As it has been argued that updating Windows Store apps was a bit of a pain. Microsoft seems to have noticed that it was always a hassle for users to manually update apps by going to the Windows Store. With this new feature implemented, Microsoft can allow apps to be updated silently. Hopefully this feature is implemented and further detailed as development continues. Stay tuned.