Filed Under: Android, Galaxy, Galaxy Nexus, Galaxy Nexus 4, Unlock NewTechie.com Admin
An Application "BootUnlocker for Nexus Devices". It’s an Android app that will unlock the bootloader on Nexus 4, Galaxy Nexus and Nexus 10 from within the Android operating environment, thus eliminating the need for using fastboot. By doing so, not only will your data remain in tact (no wipe required here), but also, the bootloader itself is not unlocked, per se, but only a few bits changed in the /param partition, allowing room for all the modifications that you need. 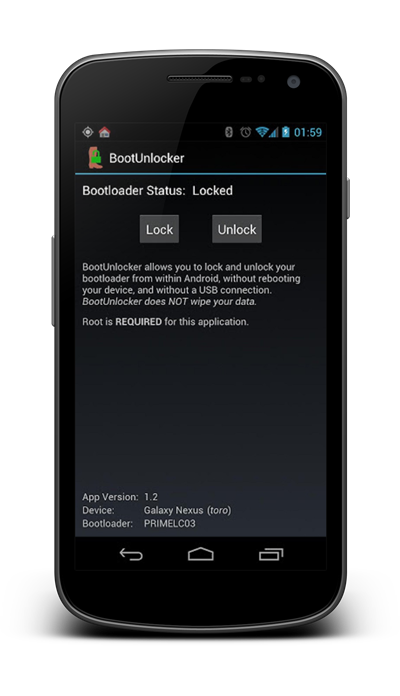 The application requires a rooted Galaxy Nexus, Nexus 4 or Nexus 10, and will let you unlock and relock the bootloader as many times as you like. Since this approach doesn’t open up the miscellaneous partition on your Android to code modifications, and since the app itself remains under your control, using BootUnlocker makes sure that you retain a certain measure of security when it comes to bootloader-level vulnerabilities.

BootUnlocker for Nexus Devices is available over at the Play Store as a free download, and will not work on Nexus 7.