Filed Under: Android, Giants, Gingerbread, HTC, Tablet NewTechie.com Admin
HTC and Sprint launched the HTC EVO View 4G on Friday, which has a couple of firsts: it's the first WiMax-compatible tablet, and it's the first tablet that can run Netflix. It also has something that we hope is a "last," which is that it's a tablet running the non-tablet optimized Gingerbread (Android 2.3) instead of a version of Honeycomb. 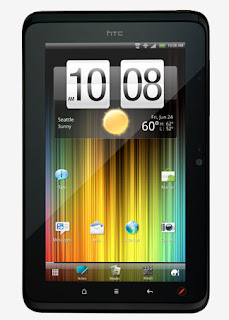 costs $399.99, with a new two-year service agreement or eligible upgrade.

Hardware-wise, the EVO View 4G has decent specs. It carries a 1.5-GHz Qualcomm Snapdragon processor (but single-core only), 1GB of RAM, 32GB of onboard storage, front (1.3 megapixel) and rear-facing (5 megapixel) cameras and a 7-inch 1024×600 screen. It also comes with a stylus pen, which (for a limited time only) will come free if you buy a two-year contract.

It's also the first Android tablet to be supported by Netflix's Android app. Netflix has been slowly adding supported devices to the list of "certified" devices. It's mostly DRM implementation on devices that are holding things back.

Netflix head of communications Steve Swasey said, in an interview, “It’s not one type of gas that goes into every vehicle. DRM isn’t consistent across all Android devices, and unlike the iPad and iOS devices, there’s not one universal solution to it.”

The choice of Gingerbread for the HTC EVO View 4G eases that problem. As such, there is still no Honeycomb-based tablet capable of running Netflix. The EVO View 4G will get a later upgrade to Honeycomb.
Read More at Tech-Ex.net