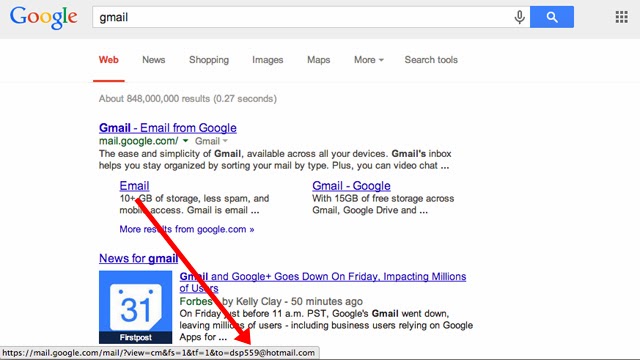 A poor Hotmail user has been shown the error of his ways. How exactly it was done is still a question, as Gizmodo reported on Friday.

If you did a Google search for Gmail you would see the above atop the query results. Clicking on the encircled link, though, would open up Gmail and pre-populate an email to dsp559@hotmail.com. That inbox belongs to the most popular email account in the world, for one David S. Peck.

Peck said the issue actually started on Thursday, not Friday, when the big Google service outage occurred. He contacted Hotmail support on Friday morning to try to get help. Ironically, he asked them to contact him at his alternate email address, which is Gmail.

It makes sense, though. According to Peck, he has been seeing thousands of blank, no subject emails, with as many as 500 of them an hour.