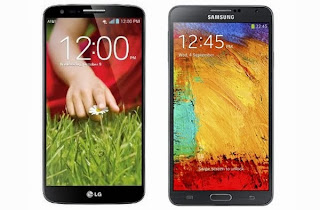 "Monkey see, monkey do" seems to be the way that Samsung and LG operate. When one manufacturer does something new with the release of an Android smartphone, the other inevitably offers something strikingly similar in its next premium smartphone. The two companies have an ongoing relationship of trying to outdo each other but still one-up the other in a way unique enough to attract more customers.

With the Samsung Galaxy Note 3 and the LG G2, the competing Korean manufacturers have found themselves at a point where both devices are actually rather unique yet still have many commonalities among its software. Before we delve into that, let's focus on how Samsung and LG have attempted to separate each other through hardware.