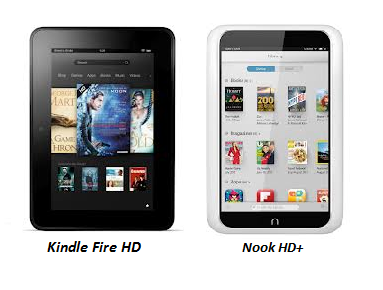 The world is going ‘gadget- crazy’, with new ones being introduced practically on a daily basis…“It’s getting hard to keep up”.

With tablets being all the rage now, companies are rushing to get ‘in-on-the-action’, and launch one of their own…Even spurring ‘e-book’ dealers to do the same. Thus, saw the advent of ‘Amazon.com’s Kindle, and ‘Barnes and Nobles’, ‘Nook’.

They’re both ‘e-readers’, based on an Android Platform, that was launched with the intention of enabling a more comfortable ‘e-book reading’ scenario. Over time however, as it usually goes, revised versions were presented to the public, like the Kindle Fire HD, and the Nook HD+

As similar as their intent, they have quite a few differences, making it hard for the consumers to pick which way to go:

They’re both appealing in their own ways, and the confusion’s understandable. But, based on the stated functions, one may find it easier to choose a tablet that’s more suitable to their requirements…hopefully.

This is a guest post by Sofia Fern. She is a guest writer from cox.wedocable.com, a site that offers information about digital cable and high speed internet.