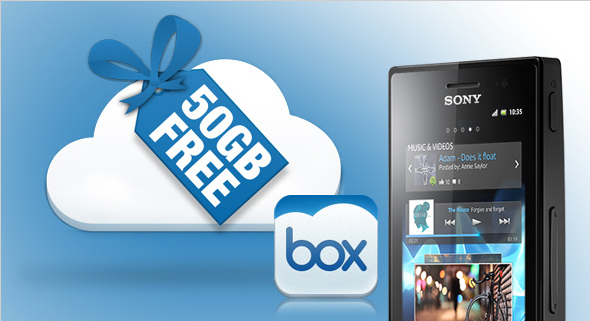 If you happen to own a Sony Xperia variant, Sony and Box are offering 50GB of free cloud storage all for the price of gratis. The promotion applies to most of the various Xperia-esque models—- though the deal doesn’t apply to the Xperia X10 mini, X10 mini pro or any device that runs on Android 2.1 or older.

You can find full details of the promotion in the presser after the break.

Xperia™ and Box® renew partnership through 2013
December 7, 2012 – 4:45 PM
2 comments
Today, we’re excited to announce we’ve extended our partnership with Box until the end of 2013!
Announced before the 2011 festive season and initially running for a year – Xperia smartphone* and Sony tablet users can now grab free 50GB cloud storage for life, by signing-up or accessing existing Box accounts from their devices before 31st December 2013.
Box is an online file sharing and cloud content management service – it makes life that bit easier by allowing you to share and access content from anywhere, anytime.
Whether it be images, videos, apps, documents (you name it), you can store, share and access files from any of your connected devices – computer, smartphone, tablet and internet enabled TV.
Keep an eye on the newsroom over the next few weeks – we’ll be sitting down with Box to talk a little more about the service and what we can expect from them through 2013.
If you have any questions about the offer, feel free to drop them below.
*Available for Xperia smartphones including and released after Xperia X10, but not for Xperia X10 mini, X10 mini pro and devices with Android versions prior to 2.1.