Evolution of the Smartphone [Infograph] 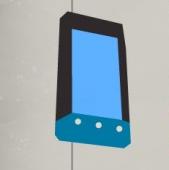 The first smartphones had touchscreens, games, even email. But only since 2007 have smartphones really seized the public imagination - and boy, have they seized it. With mobile data traffic now greater than whole Internet's was only a decade ago, people are still glued to the screen -- only this type of screen isn't glued to anything else.

Now, it’s time to take a look back at the evolution of smartphones [Infograph]; courtesy of the folks who brought you the world’s first Android and Windows phones.