Filed Under: Android, android Phone, iPhone, NT, Smartphone NewTechie.com Admin
In the era of smartphones and tablets, there are two devices that are giving each other a tough competition in terms of better features and functions. These are – Android devices (based on Google Android OS) and Apple’s iPhone (based on iOS). Android devices, which came later in the market and within no time, became popular among the masses; is the obvious choice of many users worldwide owing to certain reasons which are explained as under: 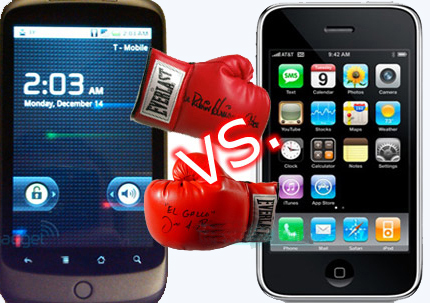 1. An expandable memory – Nowadays, people use a smartphone for a lot of purposes related to multimedia and games. They expect their devices to store most of their digital content like songs, movies, pictures or games and the built-in memory can be insufficient for storing them. The Android smartphones allow users to use removable storage such as Micro SD which saves a lot of money as they need not buy another phone with a better storage capacity every time.
2. Built-in Navigation – Although it is a smartphone with all the advanced features and functions, the iPhone does not have a built-in, turn-by-turn navigation app although it uses the Google Maps. Android devices on the other hand, have built-in navigation applications that provide audio and visual cues to direct the user.
3. More choices in terms of hardware - There are a number of Android devices in the market with different hardware specifications; the users can buy the ones they are most comfortable with.

Also, since the Android devices vary in terms of screen size, processor speed and storage, they are available under different prices and fit in the budgets of the users.

4. Unrestricted installation of Third Party Apps - Google gives Android owners the freedom to install apps from a third-party source using a third-party file manager, which is unheard of in an iPhone device.
5. Option of customizing Home screens - The Android devices provide their users, the option of customizing the home screens. The users can now do away with traditional looking home screens with just rows of apps and add shortcuts, widgets or control panels as per their choice; adding to these options are customizable widgets that are available with Android 4.0.

Additionally, the Android phones offer integration (native) with social networking apps whereas the iPhone can do this with the help of third-party apps only.

7. Various options in default apps -  Android devices provide a more number of choices in terms of default apps for email, browsing, calendar etc. For example, the users can set any browser, calendar or other such apps as the default app on their device.

These reasons justify the Android based smartphones’ superiority over the iPhone device. But going by the phrase which states-no two days are the same, even the iPhone can overcome these shortcomings and overtake the Android devices and gain the topmost position in the mobile world in the near future.

About Author: Alicia Carter is a mobile app developer at Perceptive Mobile Apps. She has extensive experience of working on platforms like Android and iOS; and loves to be updated in the latest news and happenings in the world of Android app development and iOS technologies. She loves writing and sharing her ideas about the various aspects of these platforms, with other likeminded people.