Filed Under: Latest, Security, United States Government, US, Wikileaks NewTechie.com Admin
Wikileaks founder Julian Assangehas told a media summit today that the United States Government is ordering Wikileaks to destroy all the material is has published on them and to cease and desist working with its sources within the government.
“[When we released our documents] the Pentagon said we must destroy everything we published and were going to publish,” Assange said. “And if we didn’t, we would be ‘compelled to do so,’” thesummit’s website says.
Assange made the allegations during a speech via Skype at the 2011 GFN News World Summit being held this week in Hong Kong.
Reports now say he is, at this hour, being forced by police to stop talking at the summit – surprise, surprise. 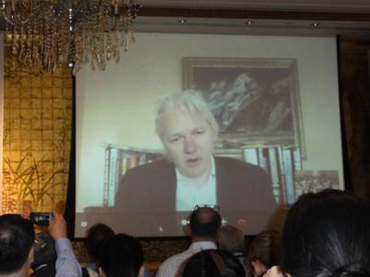 He was met with a massive wave of applause from journalists as he appeared on the screen.

Julian Assange is currently facing extradition from the UK to Sweden on rape charges. His defense team believes that said extradition could lead to Assange facing prosecution in the U.S. for his involvement in the WikiLeaks website.
News executives and media owners from over 80 countries have gathered in Hong Kong for the summit to discuss editorial principles and tools as well as business models for news media.
The GFN News World Summit, which began yesterday, will last for four days.