Filed Under: Download, Hacking, Hacking Tools, Security NewTechie.com Admin
1. Nmap
I think everyone has heard of this one, recently evolved into the 4.x series. 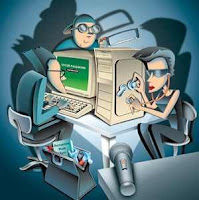 Nmap (”Network Mapper”) is a free open source utility for network exploration or security auditing. It was designed to rapidly scan large networks, although it works fine against single hosts. Nmap uses raw IP packets in novel ways to determine what hosts are available on the network, what services (application name and version) those hosts are offering, what operating systems (and OS versions) they are running, what type of packet filters/firewalls are in use, and dozens of other characteristics. Nmap runs on most types of computers and both console and graphical versions are available. Nmap is free and open source.
Can be used by beginners (-sT) or by pros alike (–packet_trace). A very versatile tool, once you fully understand the results.

2. Nessus Remote Security Scanner
Recently went closed source, but is still essentially free. Works with a client-server framework.
Nessus is the world’s most popular vulnerability scanner used in over 75,000 organizations world-wide. Many of the world’s largest organizations are realizing significant cost savings by using Nessus to audit business-critical enterprise devices and applications.

3. John the Ripper
Yes, JTR 1.7 was recently released!
John the Ripper is a fast password cracker, currently available for many flavors of Unix (11 are officially supported, not counting different architectures), DOS, Win32, BeOS, and OpenVMS. Its primary purpose is to detect weak Unix passwords. Besides several crypt(3) password hash types most commonly found on various Unix flavors, supported out of the box are Kerberos AFS and Windows NT/2000/XP/2003 LM hashes, plus several more with contributed patches.

4. Nikto
Nikto is an Open Source (GPL) web server scanner which performs comprehensive tests against web servers for multiple items, including over 3200 potentially dangerous files/CGIs, versions on over 625 servers, and version specific problems on over 230 servers. Scan items and plugins are frequently updated and can be automatically updated (if desired).

Nikto is a good CGI scanner, there are some other tools that go well with Nikto (focus on http fingerprinting or Google hacking/info gathering etc, another article for just those).

If you need an alternative for nmap on Windows with a decent interface, I suggest you check this out, it’s pretty nice.

6. p0f
P0f v2 is a versatile passive OS fingerprinting tool. P0f can identify the operating system on:
Basically it can fingerprint anything, just by listening, it doesn’t make ANY active connections to the target machine.

7. Wireshark (Formely Ethereal)
Wireshark is a GTK+-based network protocol analyzer, or sniffer, that lets you capture and interactively browse the contents of network frames. The goal of the project is to create a commercial-quality analyzer for Unix and to give Wireshark features that are missing from closed-source sniffers.

Works great on both Linux and Windows (with a GUI), easy to use and can reconstruct TCP/IP Streams! Will do a tutorial on Wireshark later.

9. Eraser
Eraser is an advanced security tool (for Windows), which allows you to completely remove sensitive data from your hard drive by overwriting it several times with carefully selected patterns. Works with Windows 95, 98, ME, NT, 2000, XP and DOS. Eraser is Free software and its source code is released under GNU General Public License.

An excellent tool for keeping your data really safe, if you’ve deleted it..make sure it’s really gone, you don’t want it hanging around to bite you in the ass.

10. PuTTY
PuTTY is a free implementation of Telnet and SSH for Win32 and Unix platforms, along with an xterm terminal emulator. A must have for any h4×0r wanting to telnet or SSH from Windows without having to use the crappy default MS command line clients.

A good free alternative to L0phtcrack.

LCP was briefly mentioned in our well read Rainbow Tables and RainbowCrack article.

12. Cain and Abel
My personal favourite for password cracking of any kind.
Cain & Abel is a password recovery tool for Microsoft Operating Systems. It allows easy recovery of various kind of passwords by sniffing the network, cracking encrypted passwords using Dictionary, Brute-Force and Cryptanalysis attacks, recording VoIP conversations, decoding scrambled passwords, revealing password boxes, uncovering cached passwords and analyzing routing protocols. The program does not exploit any software vulnerabilities or bugs that could not be fixed with little effort.

13. Kismet
Kismet is an 802.11 layer2 wireless network detector, sniffer, and intrusion detection system. Kismet will work with any wireless card which supports raw monitoring (rfmon) mode, and can sniff 802.11b, 802.11a, and 802.11g traffic.

A good wireless tool as long as your card supports rfmon (look for an orinocco gold).

14. NetStumbler
Yes a decent wireless tool for Windows! Sadly not as powerful as it’s Linux counterparts, but it’s easy to use and has a nice interface, good for the basics of war-driving.
NetStumbler is a tool for Windows that allows you to detect Wireless Local Area Networks (WLANs) using 802.11b, 802.11a and 802.11g.
It has many uses:

15. hping
To finish off, something a little more advanced if you want to test your TCP/IP packet monkey skills.
hping is a command-line oriented TCP/IP packet assembler/analyzer. The interface is inspired to the ping unix command, but hping isn’t only able to send ICMP echo requests. It supports TCP, UDP, ICMP and RAW-IP protocols, has a traceroute mode, the ability to send files between a covered channel, and many other features.

16.OllyDbg
OllyDbg is a debugger that emphasizes binary code analysis, which is useful when source code is not available. It traces registers, recognizes procedures, API calls, switches, tables, constants and strings, as well as locates routines from object files and libraries.

According to the program’s help file, version 1.10 is the final 1.x release. Version 2.0 is in development and is being written from the ground up.

The software is free of cost, but the shareware license requires users to register with the author. The current version of OllyDbg cannot disassemble binaries compiled for 64 bit processors.