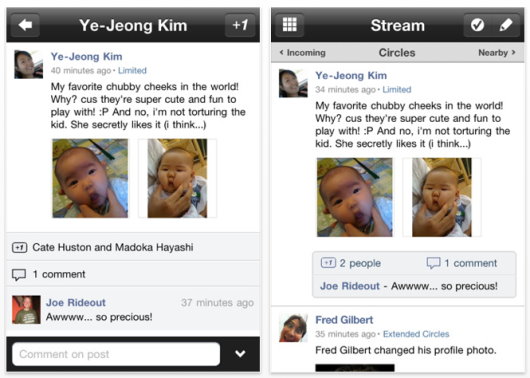 The Google+ app has risen to the top of the Free Apps List in the App Store, after a mere 24 hours. It's pretty amazing, but shows that Google might have finally gotten a social networking initiative right.

Interestingly enough, the top free iOS app, of all time, is Facebook's app. Funny how they are both social networking apps, eh? Of course, the Google+ app (available here in the App Store).

In addition, Paul Allen (the CEO of Ancestry.com, not the Paul Allen of Microsoft fame), who has been tracking Google+ membership using an "algorithm" based on surnames and census data, said earlier that Google+ would pass 18 million members on Wednesday.

Pretty darn good for a service that remains invite only.

So how many John and Jane Q. Public type folks are joining, just to join the latest hot thing, but not using it? It's a good question.

The latest Android and iOS app stores in 2018
Hello friends
Are you using the old app store? Want to change your store? You are finding? Shop for the best quality app, free app for everyone in the world. Visit this site for additional settings by following the instructions here: https://iplaystoredownloadfree.com/

Here are the stores you can refer to:

Hope my store will bring a new look to the phone world. Wish you have the best app store for your mobile device, thanks!