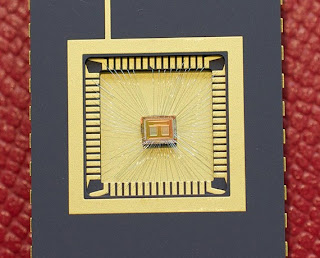 You've got to hand it to IBM's engineers. They drag themselves into work after their company's 100th birthday party, pop a few Alka-Seltzers and then promptly announce yet another seismic invention. This time it's a new kind of phase change memory (PCM) that reads and writes 100 times faster than flash, stays reliable for millions of write-cycles (as opposed to just thousands with flash), and is cheap enough to be used in anything from enterprise-level servers all the way down to mobile phones. PCM is based on a special alloy that can be nudged into different physical states, or phases, by controlled bursts of electricity. In the past, the technology suffered from the tendency of one of the states to relax and increase its electrical resistance over time, leading to read errors. Another limitation was that each alloy cell could only store a single bit of data. But IBM employees burn through problems like these on their cigarette breaks: not only is their latest variant more reliable, it can also store four data bits per cell, which means we can expect a data storage "paradigm shift" within the next five years. Combine this with Intel's promised 50Gbps interconnect, which has a similar ETA, and data will start flowing faster than booze from an open bar on the boss's tab. There's more detailed science in the PR after the break, if you have a clear head.

Made in IBM Labs: IBM Scientists Demonstrate Memory Breakthrough for the First Time